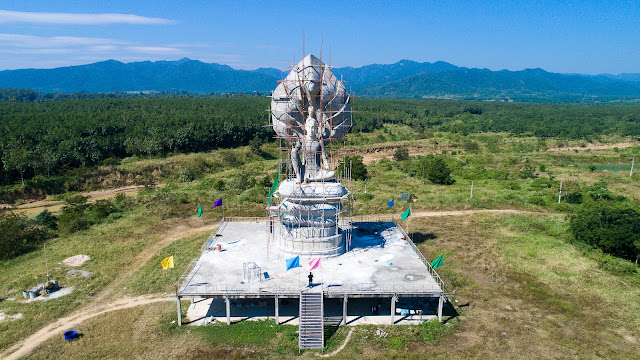 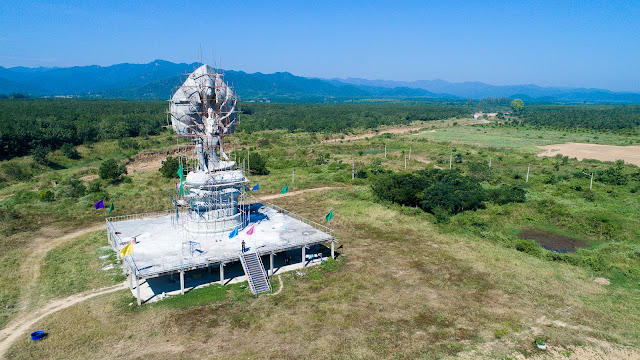 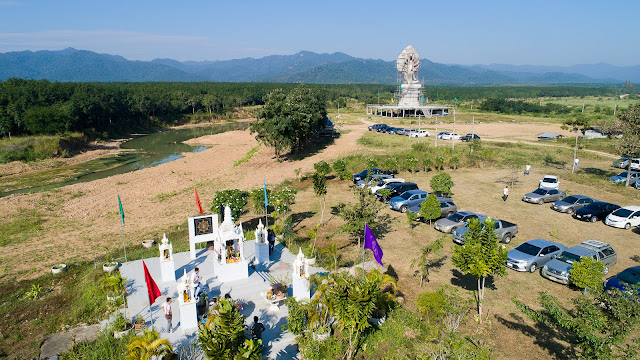 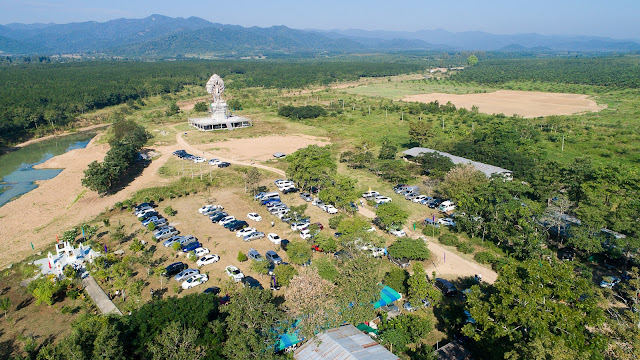 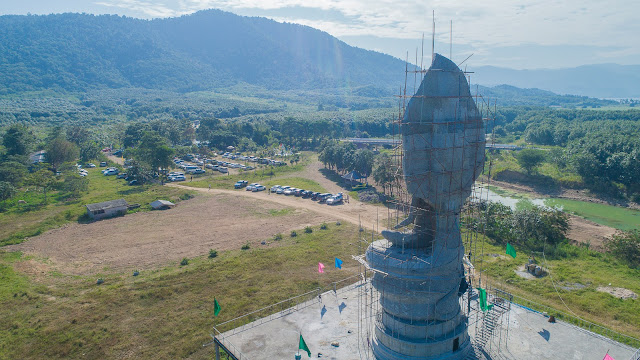 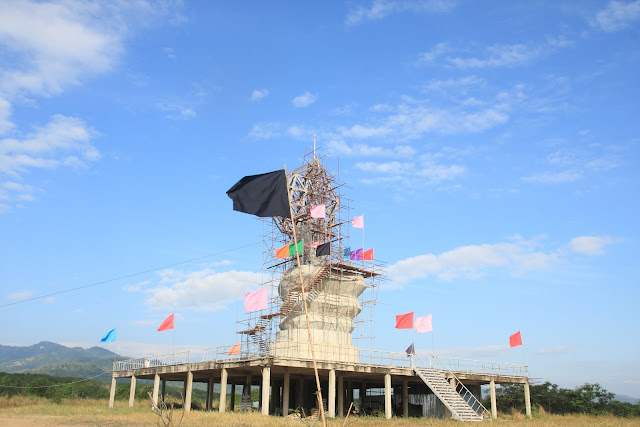 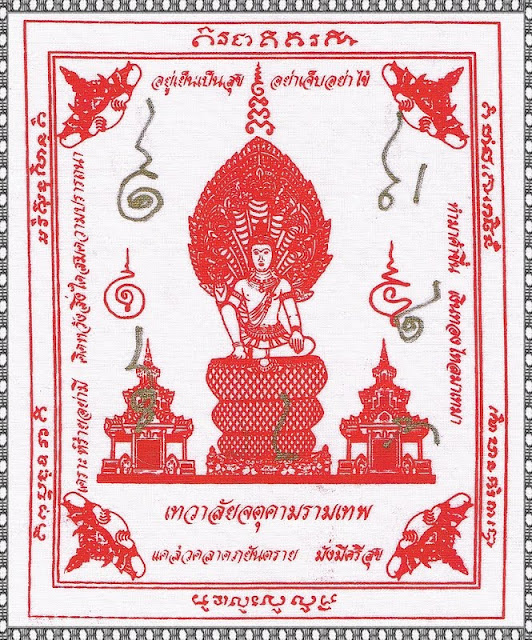 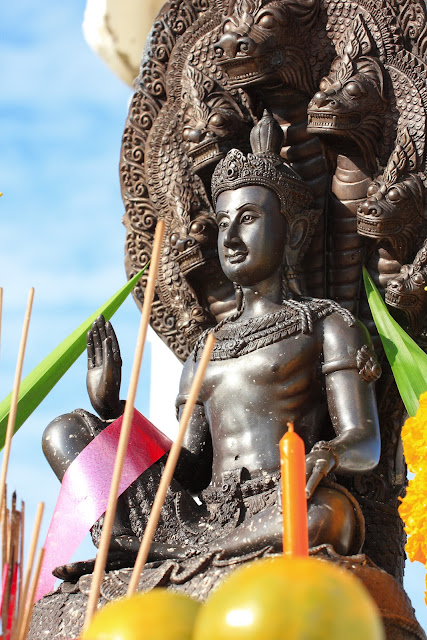 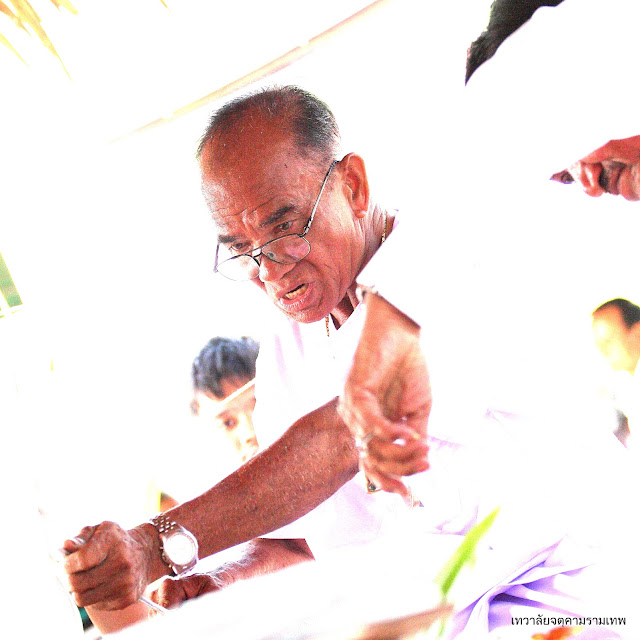 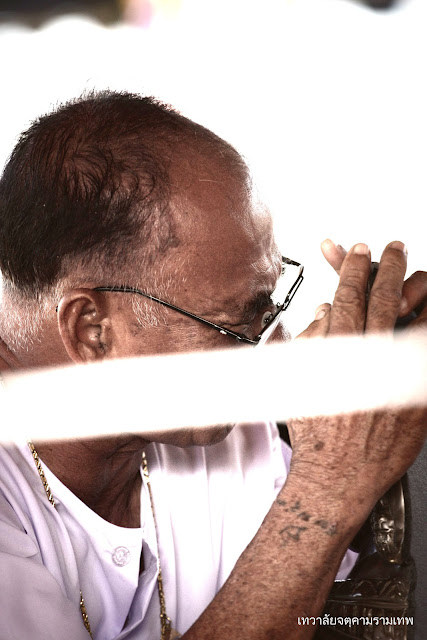 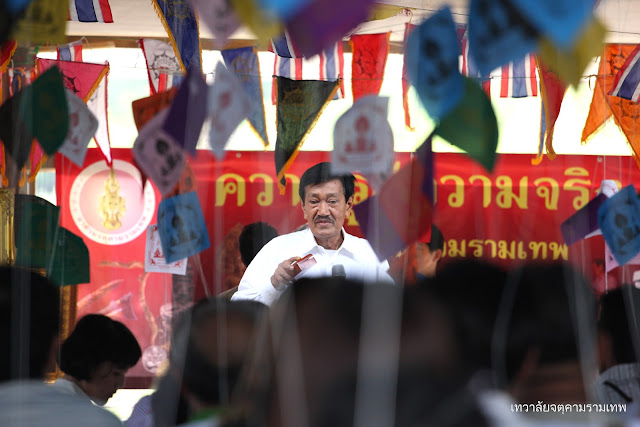 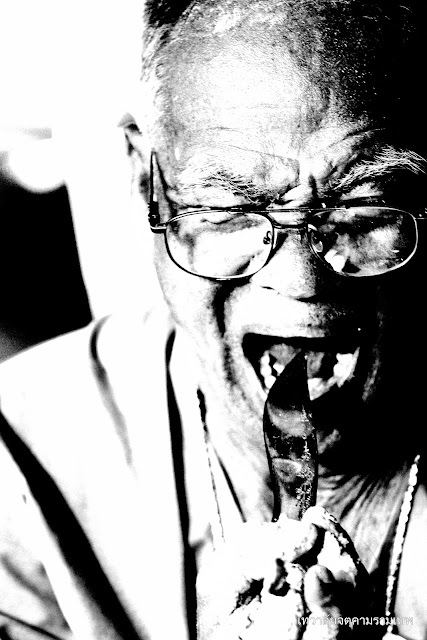 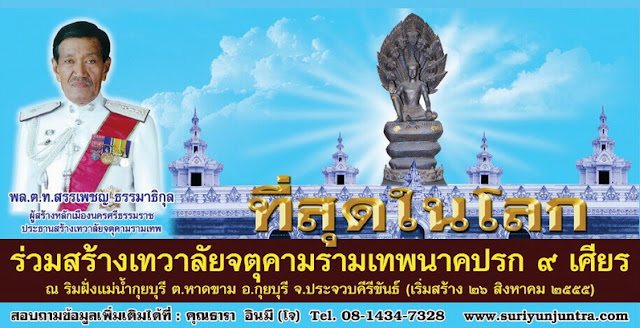 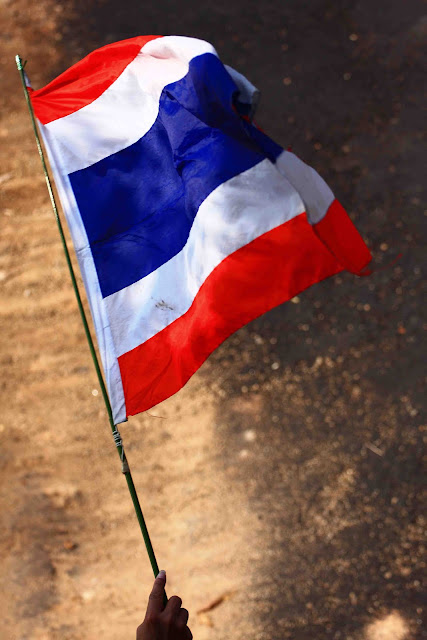 “Jatukham Rammathep siting on a throne of 9-headed serpent ” sculpture is a symbol to teach the children that “Jatukham Rammathep” is the founding emperor of the Suvarnabhumi (prolific land) empire in south eastern Asia region with “ King Zheng of Qin,” , the founding emperor of the Chinese empire in the 3rd Buddhist era. There are only traces left of the glorious civilization from the western shore of Andaman sea all the way to the eastern shore of China Sea in Vietnam including the islands in the southern sea of Suvarnabhumi civilization that is deep rooted in the conscious of the locals that were living in the empire who are reminiscing of the pride of the empire that was as powerful as the Greek and Roman empire in Europe. As long as the sun the moon and the stars orbit in the Life cycle, things in the world would be born and die according to the life expectancy in days, months, years, seasons. When it’s time it would evolve into something new and the cycle would keep repeating itself similar to the dharma wheel such as the Jatukham Rammathep phenomenon. That occurred over the land of Nakhon Si Thammarat 27 years ago inspiring faith in people from all walks of life being born then dying. Now the phenomenon is being reborn in the form of a giant sculpture that is deemed to be amazing precious item of the land. It is to tell the children that the land we’re living in is the center of Suvarnabhumi Empire, the oldest empire in Southeast Asia that was to be a prosperous and powerful no less than any empire in the world.

The Stele of King Jitsanemahean Taraworamon the great, the founder of Cambodia kingdom. It has been cited that his ancestor is “Universe king” the sole empire ruler. He claimed the rights over the Suvarnabhumi throne and brought the army to attack Suvarnabhumi Empire until it diapered without a trace. Therefore no one knows who he is. Right now the dharma wheel has circled back creating faith in Jatukham Rammathep to announce the intention too the sky and land and starting the building of dwelling place for the soul of the “universe king” to give blessings over “the holy empire”.
This place is not only a sanctuary for the giant sculpture of “Jatukham Rammathep” with people from all walk of life to go worship and ask for blessing, it is also important historical monuments of Southeast Asian Nations. The location insistently challenges the wisdom of, historians, archaeologists, philosophers artists and visitors from all over the world to help solve the mystery of the fact hidden in the dark corners of history for a long game that answer the question of how can it have been preserved through all these Time dimension. the giant sculpture of “Jatukham Rammathep” would be telling the children both in the present and the future of the story that the Suvarnabhumi people or what is called “Funan Kingdom” in Chinese chronicles have never migrated or escaped anyone from anywhere. Our ancestors have been here for over 2,300 years.

Even though the humongous land of Suvarnabhumi empire has been broken into numerous small and big nations and the time has changed their belief, religious sects, culture, and language to be different, but the spirit that bound together under the same civilization is still buried deep under consciousness has not diminished. The holy spirit of Jatukham Rammathep that dwells in the biggest sculpture in the world will inspire Suvarnabhumi people to want to revive the arts and science of the ancestors to be applied to new innovations to compete with other countries and to join forces to create strength to negotiate with superpower nations, and to be the driving force for Indochina lands and south sea islands to be as prosperous and wealthy as the golden age of Suvarnabhumi in the past.

The legend is a story concocted by the actual layout in history; Siam, Mon, Burmese, Cham, Laos, Vietnam, Jawa, and Malay have all lived together as brothers and sisters in Suvarnabhumi empire and believe that the serpent is a powerful god that make the land prosperous, peaceful, and wealthy so it is worshiped such as the ancient Khmer legend on “Phra thong” and “Nang Nak” a folk the is consistent with Prince Kampu” the first king of Cambodia marrying “Apsara” the daughter of the more powerful emperor of Suvarnabhumi empire that is so powerful as the royal serpent in the ocean. It started the tradition of respectfully accepting that the Queen Mother is greater than his father. It is the origin of the tradition of succession by the “moon” doctrine. The doctrine ids the origin of Chinese chronicles calling Cambodia “Sleeping Moon Country”. The historical sites on the banks of Mekong River used to be the location of Sedhapura city (ancient Cambodia royal city in Champasakdistrict south of Loas, the children of Prince Kampu have built a castle at the foot of the holy mountain for the placement of the Hindu phallic symbol of creative power of “King Sreputarasuen” . All Cambodia kings must go there to have sex with the soul of Nang Nak in the holy temple for the blessing for the country to be prolific.
The Stele at the holy ruins in Mỹ Sơn, Vietnam states that the first king of Champa kingdom who erected the city pillar for “Omroundwadee city” and married “Nakeesoma” the daughter of the royal serpent. All the legends reflect the worshiping of 9-headed serpent of Suvarnabhumi people that belie3ve that 9-headed serpent is a powerful god that can either bless or curse the city. There’s also a legend on “ Katemala” marrying “Tavadeetavee” the daughter of the king of serpents and the king of serpents suck the sea dry and magically created “Intrapruk city” as a wedding gift giving it to “ Katemala” and then later on “ Katemala” fell for another woman, the serpent king got angry and flood the city. The wars over Suvarnabhumi Empire between Siam and Cambodia have been going on and on until “Ramathibodi I Uthong” established Ayutthaya to be the royal city in 1350. He ordered “Khun Luang Pa Ngua”, or “Wattudejammart” to lead the army to attack “Kampucheabadi city”. After the city being destroyed, Ayutthaya started to war Burma for hundreds of years ending up with Ayutthaya losing and not long after that Burma became an England colony.
Presently, ASEAN Community are jointly creating the “new Suvarnabhumi Empire” in this region. The ones who believe in Jatukham Rammathep are jointly building the biggest “Jatukham Rammathep siting on a 9-headed serpent” statue in the world at the same time with the hope of inspiring Suvarnabhumi people leaders to love and understand each other, to focus on building a strong trading economy to create stability for Southeast Asia, and to help each other make the region as prosperous as Suvarnabhumi Empire in the past.
The Jatukham Rammathep statue built for holiness will result in holiness as desired. People from all walks of life will go there to worship resulting in the land being more prolific than expected. 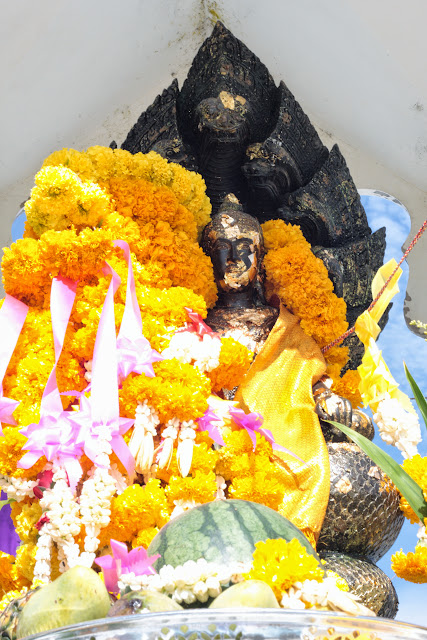 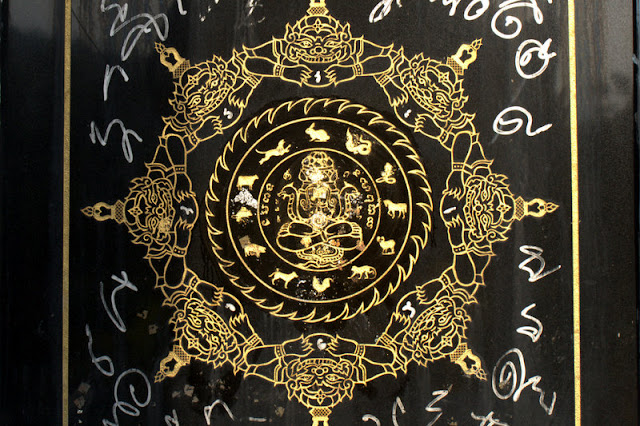 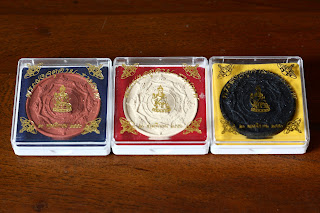 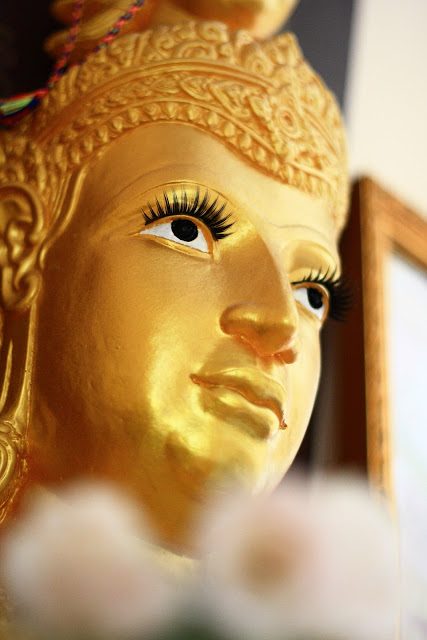 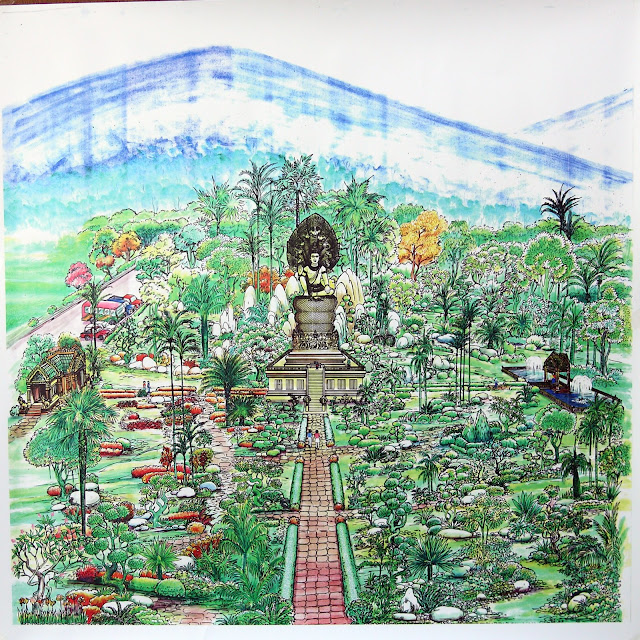 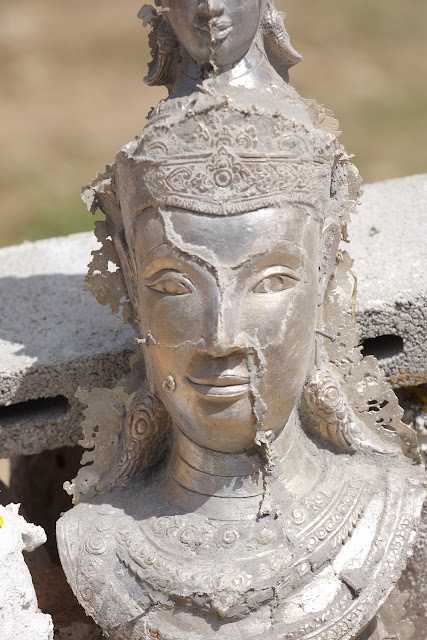 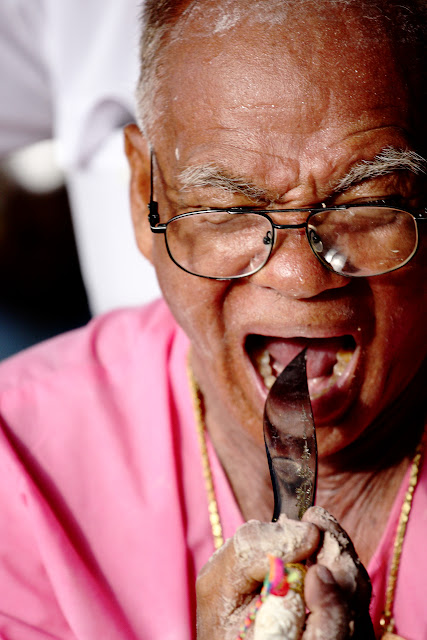 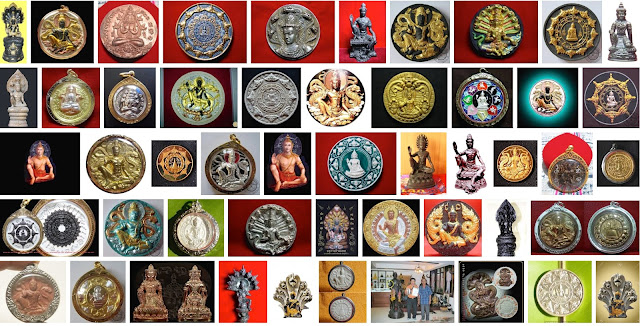